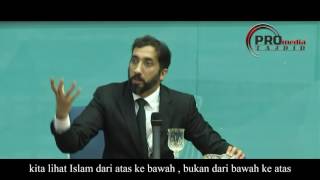 Nouman Ali Khan on Islam and Politics, in Malaysia "There's a relationship between Islam and Politics but the way that the Muslims talk about it is not very true to the text of the Quran...we can have the most Islamic government but still the most unislamic society. And it means nothing to Allah عز و جل"

Muhammad Was A Feminist

The prophet Muhammad would be appalled by how current Islamic Fundamentalists are treating women under their control. This suppression is done in the name of Islamic Law, known as Sharia. But the current suppression of women is shaped by cultural and history. It has little basis in the Quran and it is certainly not consistent with anything we know about what Muhammad taught or how he treated women. Of all the founders of the great religions - Buddhism, Christianity, Confucian

THE making, amending or repealing of a law is Parliament’s primary function. Whether it is an ordinary Act of Parliament (like the Road Traffic Act), or a law to combat subversion or emergency, or a constitutional amendment, the legislative proposal must go through the fires of scrutiny in both Houses of Parliament. Subsidiary legislation: Regret­tably, the above theory does not apply to delegated (or subsidiary) legislation, which is made by persons or authorities outside of

Islamic scholars urged to speak up on shariah issue

PETALING JAYA: Islamic scholars need to speak up against “self-interpreted” shariah laws, says Islamic Renaissance Front (IRF) Director Dr Ahmad Farouk Musa. Speaking to FMT, Farouk said there was a difference between “the sacredness of shariah” and “fiqh” (Islamic jurisprudence) which is interpolated based on human construct. Using PAS President Abdul Hadi Awang’s bill as an example, Farouk said such laws and bills should be open for debate as the laws were human interpreta

The Vision of our founding fathers

The pleasures of living in a multicultural, racial and religious country are many - multiplicity of voices, experiences, food. But it’s not without its problems. Here today to discuss negotiating those tensions is a man who lived through the formation of our country, and who has dedicated his life to public service - Tan Sri Alwi Jantan, former Director-General of the Public Service Departments. BFM podcast

The 21st Century - the Asian Century